Okay, time to introduce the rare reader to a brand new section of this blog: “archery”. Something that you’d never expect, right? And this will be the very first post covering this topic. Everyone who starts archery as a hobby soon has a terrible itch to cut down the costs on it… somehow. Since there aren’t many archers out there archery stuff is quite pricy, especially if you want to to compete on at least amateur level. 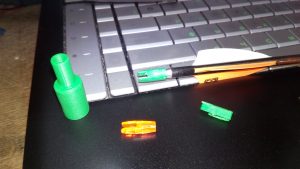 The topic today will cover arrow nocks. For those of you that don’t know – this is the thing at the very tail of the arrow that is used to lock the the arrow tightly on the bowstring before you shoot. It’s made of ABS plastic and is doomed to crack one day or another. If you drop your arrow, if it wears down or if you hit one arrow with another one. For my arrows (Easton carbon one) the nocks are 1.5 euro each (lolwut?). That’s why the very same moment I had my first incident when I hit one arrow with another I decided to fix it somehow.

Thanks a ton I have my own 3d-printer at my disposal, so that basically sums it up. But I wouldn’t worry about it either way because there’s a 3d printing service not far from where I live.
My first attempt on an arrow nock was done in OpenSCAD. The result looked like this: 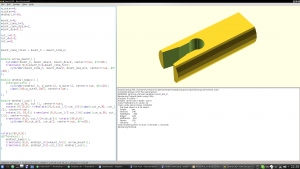 And like this when printed and attached to the arrow: 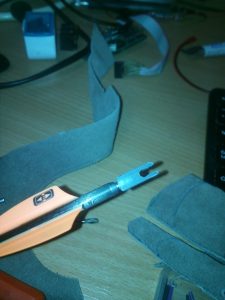 It turned out that sharp edges stick bad to kapton tape I was using and the whole thing was quite warped, but worked. Besides you had to do some nasty finishing with sandpaper and scalpel to remove the brim before fitting the nock. Otherwise it would cut the bowstring. Okay, lesson learned, so I put aside my attempts on a 3d-printed nock for a while until I once again upgraded my good old Solidoodle 2 3d-printer. Yes, I still sometimes keep calling the authors of this device with some really nasty words whenever I encounter another piece of their engineering I don’t like. No wonder they closed down.

My second attempt at this was 8 months later when:
1. Replaced the heated bed heater with silicone rubber one for an even heatup that reduced warping greatly.
2. Threw away the kapton and installed buildtak surface that made excellent adhersion.
3. Threw the stock extruder into the junk and replaced it with an E3D V6 hotend assembly.
4. Tightened the belts, applied greese, upgraded all software, etc.

All of the above greatly improved the print quality so I fired up solvespace and made the second revision of this design where I tried to fix all the issues of the first revision: 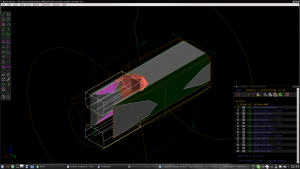 This time you can fit the nock right after printing without any additional operations. 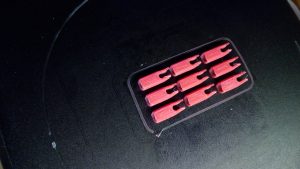