Okay, I admit, adding a webcam to watch how your print is doing in nothing new, but since I plan on hooking 4 cameras, that might be considered novel. Anyway, in the earlier post I described the analog camera modules I’ve found in the attic and added a nice 3d-printed camera mount, in this post I will describe the other hardware part of my capture setup. But before the lengthy details – here goes a test capture from one of the cameras.

As you see the quality is not of the best and high temperature in the printing chamber contributes a lot to the noises from the camera matrix.

So, here how these cameras look like when you attach them to the frame: 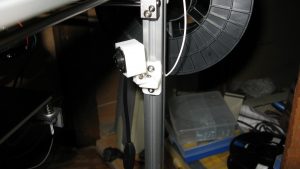 Now, for them to work we need a few other things. Namely, some capture hardware that will feed the video into the linux box and some power source.

The capture hardware: I found in the very same attic an 4-channel EasyCAP based on Syntek chip (the one that’s properly supported in linux!). The plastic case was literary falling apart, so I threw it away.

Power: Each camera expects some 9-12 volts input according to specs, but that fat thing on the cable gets terribly hot very soon. No way I could power it from 14 volts of my 3d-printer PSU directly. I cracked one of the cam’s cables open and found a 78L05 regulator there. Gotcha! So the camera needs 5 volts internally in reality! So I decided to add a step-down regulator to the mix that will turn 14 volts into 7.5 volts. This way the linear regulator won’t overheat and 2.5 volts are more than enough to compensate for the voltage drop.

I added a USB hub to the mess and made a nice-looking for it: 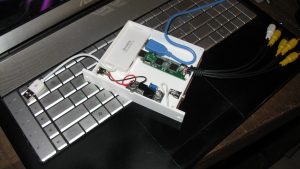 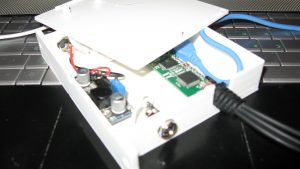 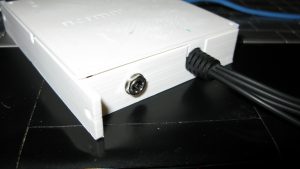 Now, time to attach this whole assembly to the 3d-printer. 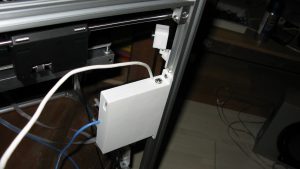 I ended up taking the USB hub apart and soldering in a different  USB cable, since the stock one was way to short.

As usual, you can grab my easycap box design on thingiverse.

While now I’m using only one camera stream, recorded by ffmpeg, I’m now writing my own tool that will capture from all four channels in turn and provide more ‘lively’ timelapse videos, but that’s something I’m going to cover in the next post sometime later.